Nick Rowe points to Scott Sumner pointing to research by Mark Sadowski: basically austerity is strongly associated with weaker economic activity in the Eurozone (so country implementing it does not have control over monetary policy with which to offset the fiscal austerity), but not associated with weaker economic activity in countries with their own currency. 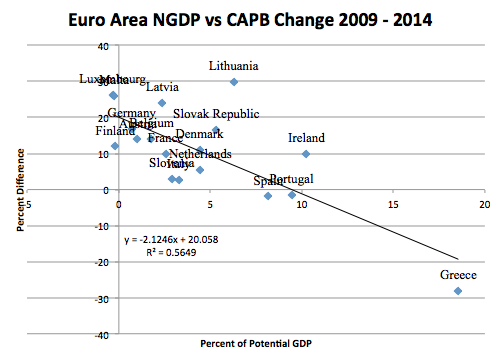 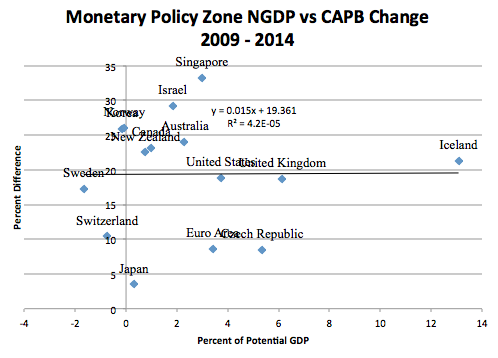 Scott Sumner uses this result to claim support for the "Market Monetarist" position (that monetary offset is always possible and so there is no reason to use fiscal policy), over the Keynesian position (that monetary policy is exhausted when interest rates reach their ZLB and fiscal policy should be used). The application of this result to the UK might be that the combination of austerity (to eliminate the government's budget deficit) and expansionary monetary policy (to boost the economy) is a perfectly coherent and practical policy choice.

Is this a valid conclusion to draw? As Nick Rowe says "It's 6 days now, which is a long time in the blogosphere. I have seen posts about who said what about who said what. What I want to see are posts that interpret those correlations. And other interpretations/explanations are always possible (though econometricians bravely try to minimise the number of plausible interpretations). How would you explain them?"

The problem for the policy conclusions that you might draw if this is the explanation is that in times of depression, not everyone can devalue against everyone else - it is by definition a zero sum game. So devaluation worked well for Iceland which was small and could achieve lots of relative price movement against e.g. the US, but it cannot work in general. There's still a need for fiscal policy - especially in relatively large currency zones like UK (which is certainly large relative to the Icelandic Krona).

# Adding trade weighted exchange rate movement over the period (xrchg) changes the picture. The correlation between the capb and xrchg variables is -63%, and the observed variation in the combination of the two variables enhances the observed negative effect of austerity upon economic activity. The austerity variable is still not significant but its 95% confidence interval includes the point estimate for the fixed rate eurozone economies.