# The Up and down, left and right post on Crooked Timber has a fascinating chart showing the relative influence of Thatcher compared to almost every other UK Prime Minister in recent history: 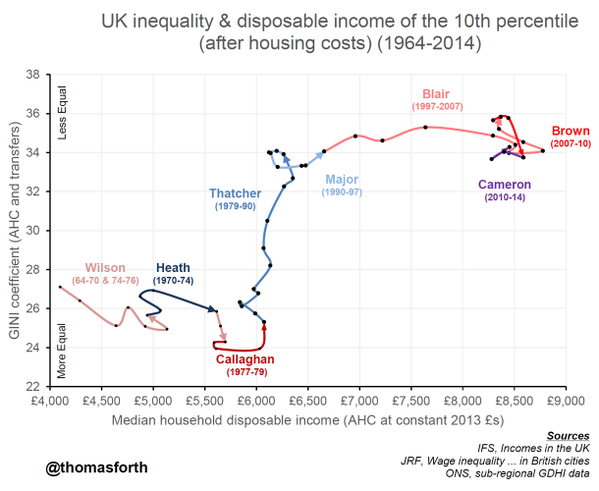 NB x-axis is mislabelled: should say 10th percentile disposable income rather than median.

# Chris Dillow speculates on London's productivity advantage over the the rest of the UK: "The fact is that London is far more productive than the rest of the country - 29.2 per cent more so ... How can this be? The obvious possibility is that ... cities do indeed benefit from agglomeration effects: people learn from living and working alongside each other. ... But there's a problem here. If this were the case, we'd expect that cities generally would have higher productivity than less densely populated areas. But in the UK, this is not so. ... our other major cities such as Birmingham and Manchester have below-average productivity. This is consistent with another theory - that London's wealth is due not to benevolent agglomeration effects but to parasitism. It might be that big legal and financial industries actually depress economic activity elsewhere, in part by sucking talent away from other uses. ... wealthy traders want to sit on top of each other - but this could be because doing allows them to benefit from insider dealing, front-running and rigging markets rather than because of genuine productivity improvements."

# The FT has a related article which anecdotally shows the impact of a region's status - talented people go high-status and help to build the status of the place that the go, but many of the other benefits that talented people bring to an area are zero-sum - if talented person A goes to region X, then benefits accrue to that region that therefore don't accrue to the other regions. Executives erode the north-south divide "the ... company has made several announcements supporting tech start-ups, and cultural and charitable initiatives near its home in north-east England. ... the global group, one of only six English FTSE 100 companies with headquarters north of Birmingham, remains rooted in Newcastle ... and is reinvesting there. The location of company headquarters matters greatly for regional economies but in the UK there is a north-south imbalance. The majority are in London and the south east. As well as conferring kudos, company headquarters support high-level, well-paid jobs internally and in a plethora of professional firms. They can underpin schools, charities, cultural and sporting venues and help maintain a balanced demographic. They can also play a vital role in fostering start-ups and promoting economic activity. These “agglomeration” effects then make it easier to attract skilled people to an area. ... Roger Whiteside ... has noticed a behavioural change among top managers. Instead of relocating their families when they clinch a top job, nowadays, he says, executives “don’t move the family, they move themselves”. Mr Whiteside lives in London but spends three days a week in Newcastle. He says Heathrow’s Terminal 5 is packed with senior executives at 6am on Mondays. ... “I think we are very close to London,” he says. But he adds; “I don’t think people in London think we are close to them.” Getting investors to visit Vertu’s Gateshead base is like pulling teeth, he says."

# Written before the Greek Referendum on 5th July, this piece from Interfluidity is great:
"Among creditors, a big catchphrase now is “moral hazard”. We cannot be too kind to Greece, we cannot forgive their debt with few string attached, because what kind of precedent would that set? If bad borrowers, other sovereigns, got the idea that they can overborrow without consequence, if Spanish and Portuguese populists perceive perhaps a better deal is on offer, they might demand that. They might continue to borrow and expect forgiveness, and where would it end except for the bankruptcy of the good Europeans who actually produce and save? ... the term moral hazard traditionally applies to creditors. It describes the hazard to the real economy that might result if investors fail to discriminate between valuable and not-so-valuable projects when they allocate society’s scarce resources as proxied by money claims. Lending to a corrupt, clientelist Greek state that squanders resources on activities unlikely to yield growth from which the debt could be serviced? That is precisely, exactly, what the term “moral hazard” exists to discourage. You did that. Yes, the Greek state was an unworthy and sometimes unscrupulous debtor. Newsflash: The world is full of unworthy and unscrupulous entities willing to take your money and call the transaction a “loan”. It always will be. That is why responsibility for, and the consequences of, extending credit badly must fall upon creditors, not debtors."
; and
"But don’t the Greeks want to borrow more? Isn’t that what all the fuss is about right now? No. The Greeks need to borrow money now only because old loans are coming due that they have to pay, and they have been trying to come to an agreement about that, rather than raise a middle finger and walk away. The Greek state itself is not trying to expand its borrowing."

# Chris Dillow's Something for nothing culture makes some similar points to my economic efficiency arguments for property tax reform. He makes the empirical point that I had not included that: "across countries, high home ownership is associated with poor macroeconomic performance; Greeks and Italians are far more likely to own houses than Swiss or Germans"

# The market economy’s stability by Beaudry, Galizia, & Portier is interesting. It "suggests that the market economy is inherently unstable and booms and busts arise endogenously as the results of market incentives. ... In the current dominant paradigm [Stable-with-shocks], there is a tendency to see monetary policy as the central tool for mitigating the business cycle. This view makes sense if excessive macroeconomic fluctuations reflect mainly the slow adjustment of wages and prices to outside disturbances within an otherwise stable system. However, if the system is inherently unstable and exhibits forces that favour recurrent booms and busts of about seven to ten years intervals, then it is much less likely that monetary policy is the right tool for addressing macroeconomic fluctuations. Instead, in such a case we are likely to need policies aimed at changing the incentives that lead households to bunch their purchasing behaviour in the first place." Although the article does not then go on to say it, one of the major mechanisms through which households' purchasing behaviour becomes bunched is through the correlating influence of the housing (and land) markets.
Posted by dcomerf at 23:58