The authors claim that their results suggest that (1) the effect of birthplace on current location (clearly a high correlation between the two); and (2) inter-generational transmission (i.e. the correlation between incomes across generations); largely explain the effect of birthplace. In contrast, they find no role for (3) human capital formation (it’s not the case that people born in a high wage location gain better school results, conditional on parental income etc). Their results “highlight the importance of intergenerational sorting in helping explain the persistence of spatial disparities”, and show that “there is a geographic component to the inheritance of inequality”.

What does this tell us? Well (1) is just the usual agglomeration story: people can be, on average, identical across locations, but in bigger locations they are more productive through greater scope for specialisation etc. Given the high correlation between where people are born and where they end up, birthplace size will statistically “explain” the extra wages that actually come from pure size effects. And (3) tells us that educational quality does not vary systematically with size.

(2) however, is about talent. Talent is heritable, and partially explains the relatively high positive correlation between the earnings of parents and their children (though advantage and privilege also play a role in explaining this correlation). This paper is measuring a geographical concentration of talent. Highly paid talented workers are clustering in larger locations, and producing talented children who, on average, also stay in these locations and go on to earn high wages.

(1) is potentially a positive sum game: on the production side, productivity is higher if everyone clusters in a single large location, rather than spreading out evenly, because the scope for specialisation is higher; and on the consumption side, product variety is higher because it is much more worthwhile to supply niche products in a large market[1]. It is easy to imagine that the consumption benefits of size may be scale invariant: city 2, twice the size of city 1, will be able to support x% more niche markets than city 1, independent of the absolute size of city 1[2]. On the production side however, it seems that the positive externalities are more highly localised and hence less scale invariant. Ahlfeldt et al (2015) find that “externalities are highly localised within the city and after around 10 minutes of travel time, … externalities fall to close to zero”. This seems to imply that once a city is big enough to support some highly productive cluster, sector or industry, then doubling the size of the city cannot be expected to further increase productivity.

Conversely, (2) is a zero sum game: talent in one location is talent that is not located anywhere else.

Further, it is not clear that increased size ends up providing benefits to the inhabitants of a location since increased size also increases congestion, pollution and land costs. Paul Cheshire claims that the current literature suggests that “doubling a city’s size produces about a 5% increase in total factor productivity, holding everything else constant”, but points to French research that suggests that the benefits from this higher productivity are entirely swallowed by increased land costs if land supply is fixed, and 40% absorbed by increased land costs if land is elastically supplied.

To the extent that large cities are exploiting potentially positive sum gains from (1), it is possible that it is worthwhile, at the margin, to have public policy that encourages the movement of people from smaller places to the largest cities (so long as we ensure open-access and freedom to build so that the land costs are more like the 40% of agglomeration benefits, rather than the 100% of agglomeration benefits under inelastic supply of housing). But to the extent that the gains from size are actually due to the zero sum game of moving talent around, then it would be stupid for public policy to encourage talent to move to large congested, expensive cities and so not be present in places where land is cheaper.

And, of course, the UK seems to take the potentially less intelligent option. The Centre for Cities 2014 report, Cities Outlook 2014, had some fascinating statistics on migration flows within the UK. The following picture was particularly striking: 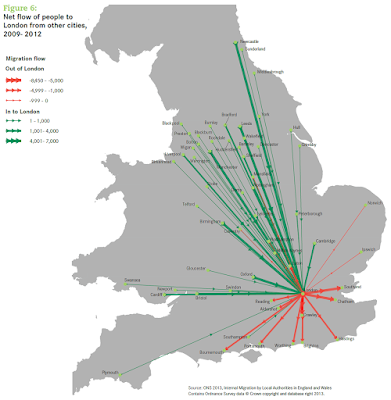 And this is not the only way things can work: in Switzerland for example talented young people who want a career in finance move to Zurich, but if you want to be an engineer then Basel is likely your destination, while for diplomacy it’s Geneva, and for government it’s Bern. The highly localised production externalities created by creating a cluster of firms in a particular sector can still be exploited, but everyone does not all try to move to the same place, land price differentials and congestion can be minimised, talent is spread out, and geographical inequality is much much lower.

Update: The Paul Cheshire CityTalks episode from 23rd June is good. Don't agree with everything he says (in particular he only focuses on the benefits to the people who move, not the costs on the people who don't) but it is interesting throughout.

LOCAL TAX: 1991 property values will still be used. @NicolaSturgeon says she has "no plans" for revaluation as it would hit some hard
— Glenn Campbell (@GlennBBC) March 2, 2016

And something for the SNP to think about: the Yes vote in 2014 was correlated with levels of deprivation i.e. it was highest in precisely those areas which have not seen the big house price rises since the last revaluation in 1991. A revaluation would, on average, benefit Yes voters and cost No voters. Therefore the decision to not revalue is effectively a gift to No voters - though perhaps that's the point since the SNP still need to convince people in these areas...
Posted by dcomerf at 01:15 No comments:

Helicopter money is being increasingly discussed as the economic outlook darkens with policy rates still extremely low. Simon Wren-Lewis discusses Two related confusions about helicopter money and Miles Kimball says that Helicopter Drops of Money Are Not the Answer. Both these pieces define Helicopter Money as QE + Fiscal Policy i.e. central banks create new money and use to buy government bonds, whilst governments run deficits, effectively giving taxpayers money via reduced tax bills (SWL: "HM is a large fiscal expansion", MK: "Printing money and sending it to people is equivalent to printing money to buy Treasury bills and then selling those Treasury bills to raise funds to send to people").

I think this is too broad a view of helicopter money, which effectively incorporates the QE that we've seen over the past decade. HM could be differentiated from this QE by considering it to be new issues of central bank money that are not used to purchase any assets, but are rather given away. This would mean the exercise of a HM policy would be much more aggressive monetary policy than QE since it would be much more irreversible (the central bank would have fewer assets relative to liabilities with which to defend the value of the currency, unless it were to be recapitalised by the fiscal authorities).

If the view of helicopter money could be narrowed to: the central bank creating new money, all citizens having an account at the central bank, and the new money being deposited on an equal per capita basis in these individual accounts; then there are two further issues that such a putative HM architecture could clarify:

1) Central bank independence in terms of the output-inflation trade-off from the level of fiscal policy. Suppose the monetary authorities have lowered interest rates to zero, and still inflation is below target; the central bank decides to engage in QE, creating money to buy government bonds; demand for bonds rises. However the fiscal authorities do not change their tax and spending plans; There is a mild stimulatory impact from lowered long term borrowing rates, but there has been no "Printing money and sending it to people". Under HM = QE + Fiscal Policy, the central bank cannot decide the level of monetary stimulus without some agreement with the fiscal authorities. If instead HM was a distribution into citizens' individual accounts, then there would be a monetary expansion without any reference to the fiscal authorities. The central bank could exercise this policy lever autonomously in line with its (inflation targeting or other) mandate.

2) Central bank independence in terms of the distributional effects of monetary policy. If the fiscal policy under HM = QE + Fiscal Policy was eliminating corporation tax, capital gains tax, and higher rates of income tax, then this would meet the definition of HM as "Printing money and sending it to people". But "the people" chosen is a highly political choice (in this case the very wealthy). A technocratic monetary authority should not be making, or party to, such political choices: and it would be if monetary objectives mandated QE that gave "windfall" resources to a particular government at a particular point in time with which to make a politicised distribution of this money. Per capita distribution i.e. a lump sum transfer, would of course be a political choice as well. But if this were the instrument specified in legislation and in the political process that set up the HM architecture, then that political choice would have been made appropriately ex ante, and the exercise of the policy lever could be made entirely on grounds of meeting monetary objectives.

Anyway, those are my thoughts on helicopter money. It struck me recently though that setting up a HM architecture of this form would also enable the climate change policy advocated by James Hansen: Fee & Dividend. This is a carbon tax policy, the revenues from which are distributed on a per capita basis. This means that climate policy doesn't cost the average citizen anything (they get back all the extra money they spend) but it changes prices in a way to incorporate the carbon externalities of their consumption choices. The individual accounts at the central bank are a perfect vehicle for paying the dividends associated with the F&D policy.

Always nice to present a single proposal that solves multiple problems...
Posted by dcomerf at 03:16 No comments: