Sterling, The Big One

It's been the big issue of the past week, so let's discuss some of the currency options for an independent Scotland and the advantages and disadvantages of each. 1) Join the Euro
Won't fly politically and doesn't sound optimal until there are a decent set of institutions for it to operate under. Barely worth considering at the moment, and nobody seems to be advocating it, but it may be a future aspiration if e.g. a transfer union can be agreed. In particular it is a much more symmetrical arrangement than a Sterling Zone, with Germany constituting approximately 30% of Eurozone GDP relative to rUK's 90% of Sterling zone GDP.

2) A Scottish currency
Will probably put people off in the referendum and there are real transaction costs involved for trade. There are also transitional issues (i.e. contracts denominated in Sterling will take a while to expire: a debt in Sterling and an income in a Scots currency would lead to a large exchange rate risk). May expose the rest of the economy to the 'resource curse' if oil exports cause an overvalued currency and other industries are therefore uncompetitive. Would allow monetary policy to be 100% weighted towards Scotland. Advocated by Jim Cuthbert and the Jimmy Reid Foundation.

Given the flaws that these three options clearly have, let's focus on the issue of the week:

4) Use Sterling in a monetary union with rUK
This is the Scottish Government's preferred option, and in what looks like a bit of pre-negotiating, something that the UK government says will not work. Alastair Darling claims:
"that keeping the sterling as currency would simply make no sense and much less worth to bother with independence because the country would still be in an economic union with the rest of the United Kingdom which would be a mini-version of the eurozone. Furthermore, Scotland would not have any say in interest rates if it would have a common currency with a foreign country because the latter would not set the interest rates according to the interest of Scotland. What Darling is trying to say is that breaking off from the union and keeping the pound as currency would undermine an eventual Scottish independence because the country would need to play by the rules set from outside."
This argument would hold more weight if anyone was actually credibly proposing e.g. a federal UK. To say that the independence that would be achieved as an independent country within a monetary union is not 'real independence' is perhaps an argument that a proponent of independence can plausibly make: but it makes no rational sense (though it may make campaigning sense) coming from the No campaign. There would be more autonomy for Scotland under the fiscal arrangements of a currency union than there would be under the current situation. Given the large combined support for independence or more devolution, the constraints of a currency union may be something that is consistent with the preferences of the electorate.

And there would be constraints. A government with the technological/institutional feasibility of running a primary surplus, in a country with its own currency, cannot go bankrupt: whatever its debt situation it can always devalue and repudiate the debt using inflation rather than default. However, within a currency union, this instrument may be needed for one member but not the other parties. In this case this policy lever disappears because the other countries are not willing to accept the devaluation, and default risk arises. To minimise this risk, a deal would have to be struck on deficit limits, but I do not accept that such a deal has to cover government spending levels: in the language of an economics class, it's (G-T)/Y that matters, and not G/Y or T/Y separately. Therefore, if Scotland wishes Scandinavian style levels of tax and spend, whilst rUK leans more towards the US style levels, then I don't see any reason why this is incompatible with monetary union so long as both are running similar government deficits/surpluses. Once a fiscal pact on deficit limits had been agreed, then so long as the government had not reneged on the terms of this agreement, the central bank would be obliged to act as lender of last resort to the government.

The monetary policy framework would be setting interest rates to meet some target at the level of the whole Sterling Zone. Scotland specific problems therefore would not have much weight - as is the current situation.

There would have to be a banking union, with the central bank guaranteeing lender of last resort status to solvent commercial banks irrespective of where they are headquartered. This also doesn't seem to be a difficult issue to arrange: so long as it's done in advance. The difficulty with this issue currently in Europe is that the need for a banking union has only become apparent after the banks in various European countries had already become certain to need such a facility. It's very difficult to gain insurance once the probability of a claim reaches 100%!

As Paul Krugman and Martin Wolf have pointed out, the best predictor for troubles within a monetary union is not fiscal deficits but rather current account deficits vis-a-vis other members of the union. The combined public and private sectors of the surplus countries within a currency union are net lenders to the combined public and private sectors of the countries with relative current account deficits. If this lending is withdrawn (as was the case when e.g. German banks stopped lending to Spanish banks), the economies of the deficit countries have to contract sharply to dampen imports and restore a Balance of Payments. The aggregate position vis-a-vis lenders from outwith the currency union is much less important for economic activity, because if these lenders withdraw their funding, the value of the currency falls to restrict imports rather than the quantity of economic activity falling. So what is the Balance of Payments situation in a notional Sterling Zone comprising Scotland and rUK? I calculate the following current account series for a notional Sterling Zone over the past couple of years. Assumptions at the foot of the post. 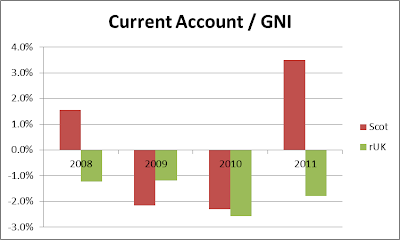 This is certainly not the 'Scotland makes a £40B contribution the the UK Balance of Payments' that has been trumpeted (a claim which Brian Ashcroft has already convincingly taken apart), but it's not a strain on rUK, and there are (small) trade benefits for rUK in having the same currency as us. So unlike the Treasury, Brian Ashcroft, or Simon Wren-Lewis, I'm a bit more optimistic about the reasonableness of the rUK government post a Yes vote. I think a currency union with rUK is probably both the politically and economically optimal policy for the Yes campaign to adopt.

The major problem with a Sterling Zone currency zone is the long term rather than the short term: Scotland's current benign position with respect to a Sterling Zone currency union is a function of oil. This is declining in quantity (though who knows the path for quantity times price) and needs to be eliminated for climate change reasons anyway. Major new exports, or a massive curtailing of imports, are needed if Scotland was to run a current account surplus without oil. If Scotland were to run large current account deficits within a Sterling Zone then we would be in the precarious position that Krugman and Wolf diagnose as being at the root of the Euro's ills. There are two solutions to this:
# Membership of a Sterling Zone is only a temporary measure and we intend to leave (either to a reformed Euro or to a separate Scottish currency) over some planned period. This could cause problems with any debts issued in the period that we used Sterling: if the term was longer than the expected period of the currency union or if the debt was expected to roll over then we'd effectively be borrowing in a foreign currency.
# The other (preferred?) solution is a transfer union within the Sterling Zone where members running current account surpluses are obliged to recycle these surpluses to the governments of the deficit countries. This could be a difficult pact to negotiate. Though as we can see from the above chart, initially and whilst the oil is flowing, such transfers are likely to be from north to south.