Translating an article from 20 Minuten (Zürich equivalent of the Metro) - but it is borders and independence/union related...

What the new Swiss superpower looks like
Always more neighbouring regions want to join Switzerland. Over 80% of 20 Minuten readers find this a good idea. We have put the pros and cons together. 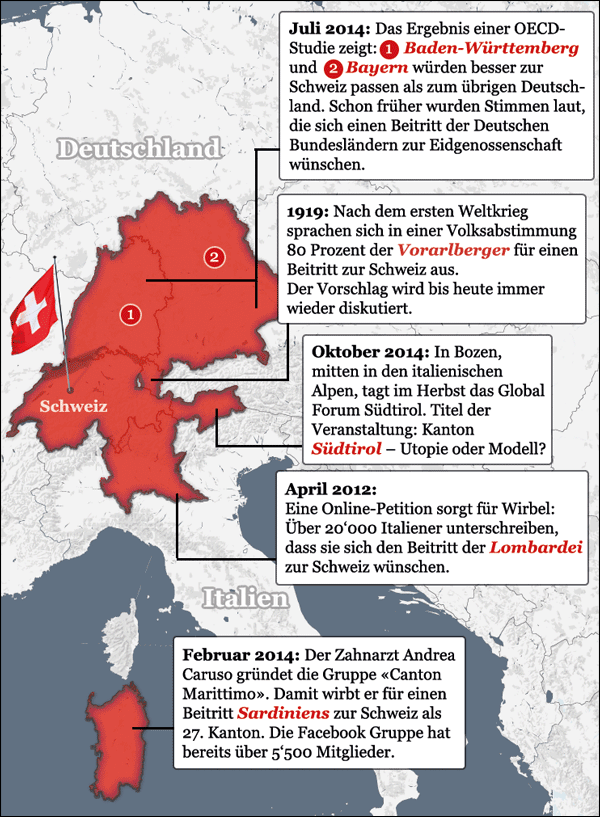 A non-representative survey of more than 44,000 participants shows that over 80% of 20 Minuten readers want Switzerland to receive these new cantons from abroad. "They are a great expansion for a great country," writes reader Bruno, 13. Mike finds "These are all "cantons" which would do well in Switzerland."

Some of the readers would be willing even to barter: "We take the Welshland from the French" or "For this we let Zürich belong to Germany".

Reasons for letting border regions join:
- Bath seaside holidays: Switzerland gets a seaport due to the "Maritime Canton" of Sardinia.
- Pizza, Pasta and Veltliner wines become the official Swiss cuisine.
- Thanks to the friendly South Tyrol, we can score even more points with the tourists.
- Thanks to the Germans, Switzerland can be football world champions in four years time.
- The Brenner Pass would belong to Switzerland. Therefore, it would have a monopoly on the (Alpine) "North-South axis"
- The new economy in Switzerland-Baden-Wuerttemberg-South Tirole strengthens Switzerland.

Reasons against letting border regions join
- When Baden-Württemberg is in Switzerland, we can no longer go abroad for cheap shopping.
- The "original" Swiss population would be outvoted against the interests of the big cantons of Bavaria and Baden-Württemberg.
- Armed conflicts threaten: in the example of Ukraine one sees the devastating effects that expansionary policy can have.
- Bavaria or Baden-Württemberg do not fit - in terms of the language - in Switzerland.
- Swiss motorcyclists in South Tyrol would have to gamble with nasty speed traps.
Posted by dcomerf at 02:40