The Carbon Bubble vs The Financial Crisis

There have been a slew of recent news articles reporting on a new paper published in Nature Climate Change, Dietz et al (2016) "‘Climate value at risk’ of global financial assets". This paper described modelling work on the asset value implications of both climate policy and climate change. Its calculations include the fossil fuel asset write-downs required to implement a particular emissions path, and a DICE climate-economy model is used to project a damaged global output path given this emissions path. The impact of this path on asset values is estimated assuming a constant profit share of GDP. It is found that "the expected value of global financial assets is 0.2% higher along the mitigation scenario [2oC limit] ... this reflects the reduction in asset values brought about by paying abatement costs in the economy—including, for instance, the stranded assets of fossil-fuel companies".

This paper therefore goes beyond the "Carbon Bubble" warnings of the Carbon Tracker Initiative, which are about the fossil fuel asset write-offs required to be consistent with stated climate change policy, in the dimension of also considering the damages to asset values caused by climate change itself. In forthcoming work, I consider another dimension: what about the business cycle response to writing-off all these fossil fuel assets? The financial accelerator mechanism would suggest that writing-off so many assets would induce a large recession, and impede the investment needed in alternative energy infrastructure. Katy Lederer has an article in the New Yorker describing some other work along the same lines.

The Dietz et al paper provides a couple of useful numbers to help calibrate the "bursting of the Carbon Bubble" against the 2008 Financial Crisis. They say that "the total stock market capitalization today of fossil-fuel companies has been estimated at US$5 trillion", and that the "Financial Stability Board ... puts the value of global non-bank financial assets at US$143.3 trillion in 2013". So fossil fuel company valuations represent perhaps 3.5% of total financial assets. To validate this figure we could note that fossil fuels represent 80% of energy generation[1], and that energy is around 7.4% of expenditures[2] so fossil energy assets should represent 5.9% of total assets if they have the same term as the average of other assets, and less if they are shorter duration. Further, many fossil fuel assets (e.g. the Saudi oil industry) are wholly state owned and so may not be in the $5tn figure (although likewise they also will not be in the denominator in this case too).

The financial crisis began with the realisation that the fundamental value of subprime mortgages (and the CDOs into which they were bundled) was much lower than had previously been recognised. Hellwig (2009) estimated that the total value of subprime mortgages outstanding was $1.2tn in the second quarter of 2008. Whilst this is a big number, even a complete loss of this value should represent a relatively mild adverse event to a well diversified investor. Instead we saw the financial crisis in which the stock market lost almost half its value, and corporate debt also saw negative returns (although non-PIIGS government bonds performed very well as yields collapsed). A well diversified investor lost perhaps 20% of the value of their portfolio[3], and Global GDP fell by 6%[4].

So given the financial crisis, what would the impact be of "bursting the Carbon Bubble"? The Carbon Tracker Initiative estimate "Only 20% of the total reserves can be burned unabated", while the International Energy Agency say "No more than one-third of proven reserves of fossil fuels can be consumed". Consistent with these estimates (since the financial value of resources and low quality reserves will be less than the financial value of high quality reserves, per unit carbon), let's assume that the total value that must be written-off is 60% of the value of fossil fuel companies. Assuming that the Financial Crisis was precipitated by a $1tn write-off, then we compare this to a Carbon Bubble figure of 60% of $5tn = $3tn, and we see that the balance sheet impact of the credible implementation of the climate policy needed to keep global temperatures 2oC above pre-industrial levels, may be around three times that which caused the Financial Crisis. If fossil fuel assets are 5% of the global asset base, then the Carbon Bubble necessitates writing-off 3% of assets. What will be the impact of this given that we saw total asset price falls of 20% and GDP falls of 6% in response to the Financial Crisis when investors realised that the repricing of their subprime mortgage holdings had caused a 1% fall in the value of their assets?

Without deliberate policy to recapitalise investors or to socialise investment, implementing climate policy that "bursts the carbon bubble" risks seriously damaging the economy, and specifically harming the very sector of the economy that should be investing in replacing the present fossil fuel infrastructure.

[2] The 20 year average for Energy Expenditures as Share of GDP, from Table 1.7 "Primary Energy Consumption, Energy Expenditures, and Carbon Dioxide Emissions Indicators" of http://www.eia.gov/totalenergy/data/monthly/pdf/mer.pdf is 7.4%

[4] Constant GDP per capita for the World, from FRED: "normal" times have real growth per capita of between 2% and 3% per annum, but this fell to less than -3% per annum during the Financial Crisis i.e. around 6% lower than normal. 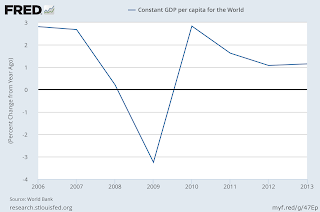