Phase Changes in the Oil Market 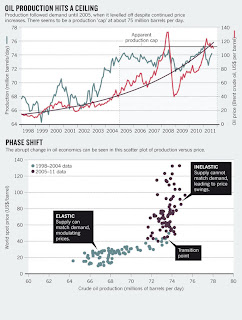 The 'phase transition' terminology is by analogy with physics (in particular, but not limited to, the physics of solids, liquids and gases) and is a phenomenon that can be seen in other complex systems (e.g. the transistion from free flowing to congested traffic). As complex systems, clearly economic systems could be subject to the same phenomena. Multiple steady state models are perhaps the best examples of economic models that could fit this analogy, and I have done some work on such a multiple steady state model of the oil market exactly to explore this issue.

I initially came to the problem after reading Prophets of doom: the secrets of Soothsaying in the New Scientist in February 2011 which outlined the technique of detecting transitions between different steady states by observing 'Critical Slowing Down'. I then did some work in December 2011 on this (see paper (it's not reached the quality required be described as a working paper yet) and slides). I did not find any evidence of critical slowing down, or by implication, of a phase change as supplies plateaued. My explanation of this (negative) result is that a phase change would be due to some change in supplier behaviour, rather than being associated with a geological inability to increase supply. The shift in supplier behaviour in such a phase change would lead to a jump in the steady state e.g. from low price high quantity, A, to high price low quantity, B, in the diagram below: 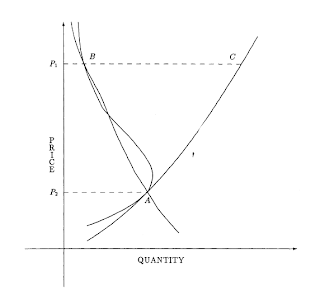 I wanted to highlight the work I had done on this for two reasons: (a) there was the flurry of interest created by the Nature article that came after I had done my work; (b) I then read Noahpinion's Sketch of a model of higher education where he says "Anyone can, of course, feel free to take this model and run with it if you like it (and if you do, feel free to include me as a co-author, or not, as you like)."

This is kind of where I am with this project: I found no evidence to support any suggestion of a 'phase change' - which I thought was an outlandish idea that might just be true. A negative result though was, I thought, equivalent to stating "No evidence found for phenomenon that no-one thought would be there anyway", which I surmised would not be a very interesting paper. However, given the Nature paper, clearly this is an idea that people are proposing and so perhaps my rejection of it is of interest? And in case I don't get round to working on this before somebody else does, this blog post is, to some extent, stating my claim to the idea. I would modify Noah Smith's quotation to read "Anyone can, of course, feel free to take this model and run with it if you like it - and if you do, please consider including me as a co-author!"
Posted by dcomerf at 14:44