With the press release of our paper on 'Constitutional change and inequality in Scotland', last week was hectic. Apart from media appearances (e.g. GMS), which are a fairly new experience, the most stressful aspect was the concern that one side or other in the referendum campaign would claim the report as vindicating their position, and that we'd be seen as biased and partial in our analysis. For an example of how political our paper turned out to be, see the last 5 minutes of FMQs last week, which end with Baillie and Salmond arguing over who had read the report most closely!

I started to get worried when I saw the Scotsman article on the paper, which inserted the word "independent" every time our press release mentioned only "Scotland" which gave the impression that independence was somehow worse than the other constitutional options at tackling inequality. I then saw conversations on twitter accusing us of producing research to order for the No campaign. I joined one of these twitter conversations with a link to the press release accompanied by the words "needs a lot of spin to be anti-Indy". When this was repeatedly retweeted I thought maybe I'd gone too far the other way... 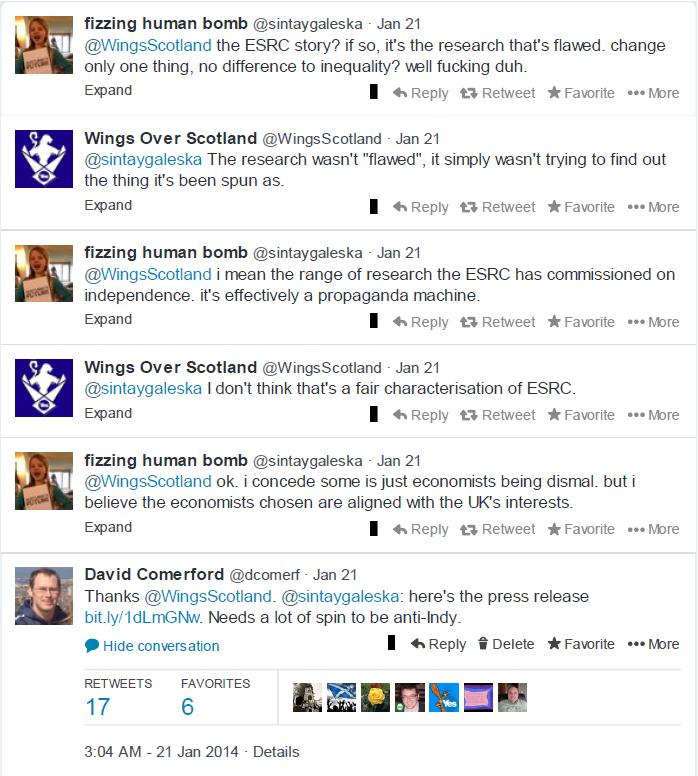 Anyway, what did our research say? And what comfort could it give to either campaign?

Our research quantified the impact on the level of inequality in Scotland of small changes in various tax and benefit levels. Our model included behavioural responses to policy changes, including a migration response. The conclusion of the research was that these small changes would have only a minute impact upon inequality levels - to achieve Scandinavian levels of inequality using on fiscal policy would require massive changes to current fiscal policy, which would likely be accompanied by adverse behavioural responses (read: decent proportion of tax base could flee the country).

If we assume that achieving Scandinavian levels of inequality is the aim, then the message of our research is that policy other than simply fiscal policy is likely required to achieve this aim. Changes in labour market policy, and in the levels of public service provision (such as improved childcare provision), that serve to bring down the level of wage inequality before the impact of taxes and benefits must be implemented - perhaps alongside small changes in fiscal policy. Over the course of a generation perhaps, the expectations of the population and the social norms that they operate under, will evolve to permit a more equal, Scandinavian style economy. All very consistent with the policy prospectus underlying the Common Weal project.

Conversely, Taxpayer Scotland also welcomed the report, especially its inclusion of behavioural responses, and they do have a certain logic: the report shows that reducing inequality to Scandinavian levels will be very difficult using only fiscal policy. If actually achieving Scandinavian levels of inequality will be slow and will require the commitment of the population over timescales of a generation or more, then Taxpayer Scotland suggest that the aim of reducing inequality should perhaps be reconsidered.

But what can the campaigns take from this? Well, The No side can claim that as an independent country, the UK already has all the levers that an independent Scotland would gain in order to tackle inequality. Indeed, the lower behavioural responses induced by the whole UK acting in concert, compared to a Scotland acting independently (with the rest of the UK functioning as an outside option for the fleeing Scottish tax base), means that, if the UK was serious about tackling inequality, then it would be easier to tackle as a 'whole of the UK' issue. The No side can also question the commitment of the Scottish population to actually implement policy over a generation to tackle inequality (especially given polling evidence like this).

The Yes side can point to the numbers in the report that show the UK being relatively unequal in OECD terms, markedly unequal in European terms, and extremely unequal when compared with the Nordics. They can point to the rationality of this situation from the point of view of what the UK has to lose in terms of the large contribution to this inequality from the City of London: the UK is not doing much to tackle inequality, and this may be its optimal policy; the UK is unlikely to ever do much to tackle inequality because it has to look after London. They can also point to the fact that fiscal policy is not nothing: power to do something here, even if relatively ineffectual, is perhaps better than the nothing that the UK is doing (in fact the UK may even be going backwards, given future planned welfare cuts). Finally, the Yes side can point to the potential of additional policy levers that do not come under the heading of fiscal policy, and which are unlikely to be included in any enhanced devolution settlement.

As one of the authors, I don’t think the report necessarily strengthens the case for or against independence, but it does highlight that there are real difficulties in using fiscal policy to tackle inequality in either case.
Posted by dcomerf at 13:54