The state of UK cities

The Centre for Cities produced a very interesting report this week, the Cities Outlook 2014, which has been all over the media. The BBC led with stories about how "the economic gap between London and the rest of the UK is widening because other cities are punching below their weight" and the Guardian described the report as "The great migration south".

The report's headlines are that 80% of new private sector jobs over 2011-12 are in London, and that the migration of the young and skilled to London can indeed be broadly characterised as "London sucks in all of the talent".

The report is consistent with the case I've made previously that the UK apparently suffers, relative to the rest of Europe, from poor regional policy. It is also consistent with other studies of UK cities, e.g. LSE's Henry Overman says: "... an empirical regularity called Zipf’s law. Applied to cities, Zipf’s law suggests that the second largest city should be half the size of the largest, the third largest city should be a third the size of the largest, and so on. To a reasonable approximation, this law holds for the relative sizes of cities in most countries. But it does not hold in Britain where our second-tier cities appear to be too small." And it is important because economic theory (e.g Krugman: The new economic geography, now middle aged) suggests that "'Cities [are] evidence that increasing returns and positive external economies actually play [an] important economic role".

If economies of scale are important, and if most of our cities are too small, then the dominance of London and its hinterland is a big deal. Scale economies are the pre-eminent example of circular, but correct, reasoning: economic activity goes to London because that's where it's most efficient, and it's most efficient because economic activity goes to London. The impact on the rest of us is that economic activity here cannot be justified because it can be better done in London, and it can be better done in London only because not enough is economic activity is being done here. George Rosie describes the loss of company headquarters from Scotland which is an aspect of this process. John Kay speculates on the effectiveness of independence as a solution for this: "How much ... is due to Scotland’s membership of the United Kingdom and how much would have happened anyway in a world in which London is a major financial and business centre is an open question. But certainly, Scotland has not been able to adopt policies of retaining corporate headquarters within its boundaries in ways that it might have been able to do as an independent country." 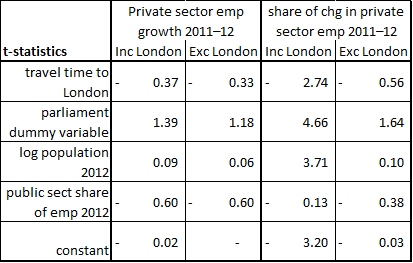 The Centre for Cities finishes with it's 'Key Messages':
- Cities are not islands
- Talk of constraining London is misplaced
- The next largest cities punch well below their weight.
- The policy privileges afforded to London should be extended to other cities
These are fine: essentially more devolution of power and local autonomy - which is consistent with the results of the above table. But their message about not constraining London is weasel-ly worded. No-one is suggesting "constraining" London - but the implicit subsidies of London should certainly be ended.

Public investment is distorted in London's favour (see e.g. Left Foot Forward's article on the New national infrastructure plan, which featured the following chart). And even though overall public sector employment as a share of population is not especially high in London, its share of central government employment is massive, and this (especially given the talent, status and influence of senior civil servants) will have associated positive spillover effects for the London economy. 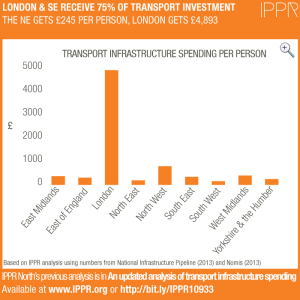 The rest of the country also subsidies London wages and housing costs through the London weighting on public sector salaries and housing benefit payments that are linked to local rather than national rental rates. If it is too expensive for the government to employ people and to operate out of London, then it should move its operations, not provide wage subsidies not available in poorer regions. If housing costs are too high and so real wages too low, then people would be discouraged from migrating to London. That would be the natural operation of the market.

As policy stands currently, the rest of the UK subsidises the operation of both the public and the private sectors in London through massive public investment, the placement of a stock (which provides for a "thick labour market") of talented and influential public employees(*), and through wage and cost of living subsidies. In return the rest of the UK sees the loss of its human capital and the elimination of possible economies of scale in other locations. A proposal to spread out central government employment and to eliminate central government funding of this level of public investment or these wage and cost of living subsidies is not a right wing proposal: a local government in London could continue to invest or pay very high levels of housing benefit if it chose to raise the money locally - incomes are high enough to support this. But it must be London that bears the cost of subsidising London, not the rest of the UK. This is not a policy of constraining London, merely a cessation of the policy of favouring London.

Other links:
- Ron Martin, Ben Gardiner, Peter Sunley and Peter Tyler at the LSE Blog
- Larry Elliot in the Guardian
- My article on Concentrating economic activity in London
(*) Business for Scotland has more on relative numbers of civil servants in Scotland, London & UK as whole
Posted by dcomerf at 15:44